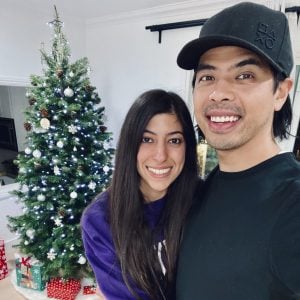 Richard’s first message to Sara on eharmony was a Game of Thrones pick-up line! She thought it was cheesy but cute and was excited that they had a shared interest. A lot of their scores on the eharmony Compatibility Quiz were very similar – the quiz helps narrow down the dating pool so people can have an easier time finding “the right one.”  They messaged each other on eharmony every day, and Richard quickly became the highlight of Sara’s quarantine days, being stuck at home during the shelter-in-place. Richard stood out to her because he cared about learning about her and was not rushing to meet up, as she was looking for someone who was willing to take things slow. After talking for a couple of months, they finally set up their first date and it felt so easy because they already knew so much about each other. They’ve been together since September 2020, but it feels like she’s always known him.